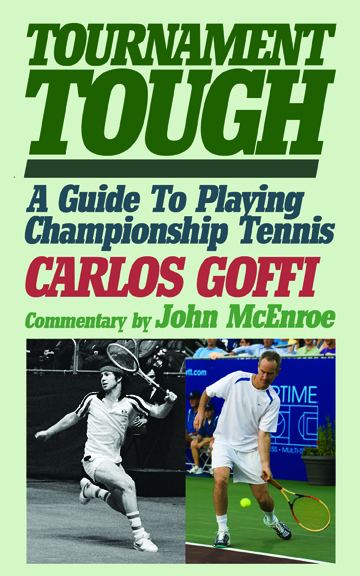 There are tennis coaching books that stand the test of time. Bill Tilden’s Match Play and the Art of Spin, Timothy Galway’s Inner Game of Tennis, Brad Gilbert’s Winning Ugly, and so does Carlos Goffi’s Tournament Tough: A Guide to Playing Championship Tennis.

Carlos Goffi’s Tournament Tough offers a unique program for winning tennis matches, and has been updated and re-released as an electronic Kindle e-book. Goffi is a former coach of John and Patrick McEnroe.

This book deals with all phases of technique and shot-making, but more importantly, covers subjects as how to pace a match, choking, anticipation, fitness and, above all, mental toughness. Intended as much for parents as for young players, and for all competitive tennis players regardless of age, Tournament Tough aims to help each tennis player realize his or her full competitive potential.

Goffi has been a keynote speaker of numerous tennis conventions and conferences, including the USPTA National Conventions, USTA National Teachers Conferences and PTR Conferences. He has held positions of Director of Tennis Promotions for Dunlop Slazenger and Director of Tennis Marketing for Nike in Latin America. Goffi was voted the 1991 Coach of the Year by his professional peers.

I can highly recommend this book for all high-performance coaches and parents of junior players desiring to maximize their abilities. The lessons that Carlos teaches are of high value and hold true today just as they did when he was working with John and Patrick McEnroe.

Tournament Tough is available for download on AMAZON.COM in the United States, UK, Canada, Spain, Germany, France, Italy, Japan and Brazil among other countries.
https://www.amazon.com/Tournament-Tough-Playing-Championship-Tennis-ebook/dp/B00CCSKTQ8/ref=sr_1_1?dchild=1&keywords=Tournament+tough&qid=1589904779&sr=8-1